The Gotheborg in West India Dock 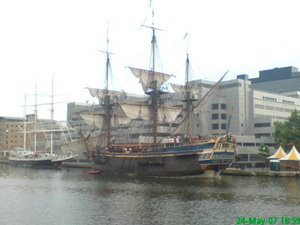 I am photographing and moblogging directly from the K800i. I will see later how it turned out.

Update: Not bad. I was really quite impressed when I discovered the built in Blogger client on the phone, and when I discovered the phone will resize and upload photos to my blog automatically. I think the only problem is the small screen of the phone. The phone's camera is capable of taking quite reasonable pictures, but it is quite difficult to tell which ones are the good ones on the small screen of the phone. All digital photographers know this problem - you just don't know which are the good ones until you download them to a computer and look at them on a bigger screen later. (Actually, this particular photo is better if you click on it and look at the larger version. Still, the bright overcast sky behind the masts is tricky). Still, this is a fun feature. I am clearly going to use it. (The annoying thing is that data roaming charges are such that I probably won't use it when I am outside the UK - which is of course the time when I am most likely to want to use it).

One slightly odd interface issue is that it does not seem to be possible to associate the camera with a particular blog when you use it for the first time on your phone. You upload a picture for the first time and it creates a new blog. It then sends you a token by SMS, you type this into blogger on a computer, log in to your Google account, and the blog is then associated with your Google account. If you have any existing blogs, you are asked whether you want to move any mobile created content to one of those blogs. I did this, and the posts are then moved to your existing blog and the new blog is deleted. All future mobile posts go straight to the existing blog.

In truth, I suppose this is a reasonable way of doing it. I was expecting to be asked to log in to Google on my phone, and to be able to then choose which blog I uploaded to. As it was I was slightly baffled by this lack of option until I logged into a computer and everything was done for me. I suppose doing it this way avoids messing around with passwords and logins and the like on a tiny phone keyboard.
Posted by Michael at 2:02 pm

It's still tough on a D-SLR, but they typically have two features to help you pick good pictures:
1. Histogram view (which I'm not good at interpreting yet, but I already can tell that my 7D's LCD is useless for telling how good the exposure is)
2. Quick zoom for sorta-checking focus. Still doesn't work well, especially at shallow depth of fields.
It should be possible to add these to cameraphones.

A couple off-topic mobile topics:
1. In the US, I'm curious to see what Sprint will be doing with WiMax (and combined WiMax/3G). The US desperately needs alternatives to the Bell/Cable duopoly.

2. There's a lot of innovation going on in camera phone cameras that will eventually affect other areas (more industrial than fine-art, I suspect).

For example, both Nanomotion (now owned by Johnson Electric) and New Scale Technologies have piezo motors for zoom and autofocus. Then there are the liquid lenses (Philips and somebody else). Finally, there are various approaches using mathematics instead of optics (e.g. wavefront encoded lenses, which then "focus" using math, and have greater depth of field).

Greater depth of field is good for cameraphones, and many industrial uses (such as Datamatrix readers), but is often undersirable for D-SLR/fine art photography.

I have been using a digital SLR (Pentax P10D) for my "serious" photography since February. I need to read the manual carefully, but it is taking great photos so far. I will blog about this later today, hopefully.

The situation in Europe with traditional phone carriers dominating the cellular business (and therefore for the moment the WWAN business) is not too different to that in America. The former national monopolies of Germany, Spain, and France have expanded outside national borders and bought assets, as has the British owned Vodafone (which now realises it needs fixed line assets to compete properly after selling itself as a purely mobile play for a couple of decades). The trouble is that these companies *think* like phone companies - they are low risk low innovation companies that want to protect their existing cash flows and believe they should be in high margin low risk businesses. That they are very slow to offer services that they don't understand of which they think may undermine their existing businesses.

So what we need is something really disruptive that comes from outside the phone industry. WiMax may be it (although I am not sure about WiMax coming from Sprint, which is after all another phone company). It will be interesting to see what happens in Europe - there are suggestions that licences for the 2.6GHz bands might be offered in a technology neutral way rather than requiring use of UMTS as did the 2.1GHz band. that might give a player from outside the traditional phone industry a chance to make a play using WiMax or something else.