In 2000, I was staying with a friend in New York. My friend lived in a residential tower belonging to Columbia University at the Hudson River end of 179th street. I wanted to visit a friend in Connecticut, so I rented a car and drove up to see my friend. I got back to Manhattan at about two o'clock in the morning, and could find nowhere to park anywhere near where my friend lived. Eventually, I gave up and drove over the George Washington Bridge to Fort Lee, NJ, parked in the car park of a strip mall, and then had to get back to Manhattan. There were no taxis to be seen, and there did not appear to be any buses back over the bridge. Therefore, I ended up walking across the George Washington Bridge at three o'clock in the morning. Interestingly, most private lighting in Manhattan had been turned off at that time, and most of the lightling visible was street lighting. This was not white, but yellow. The famous skyline was visible, but New York was therefore a yellowy-red colour rather than the white it would have been earlier in the evening. As always, the skyline was magnificent, with two clumps of buildings, at midtown dominated by the Empire State Building, and downtown dominated by the World Trade Center. Not everyone loved the WTC from an architectural point of view (I rather liked it), but it did something magnificent to the skyline. At three in the morning (as indeed at other times) the skyline was breathtaking. I haven't visited New York in the last year, but when I do, I will not be able to look at the (still magnificent) skyline without thinking about what is missing. In 50 years time, I will not be able to look at the skyline without thinking about what is missing.

This, I think is the fundamental reason why something immense and magnificent has to be built in place of the WTC. To hopefully slightly lessen the feelings of emptiness that I, and many others, will feel when looking at the skyline.
Posted by Michael at 2:34 pm No comments: 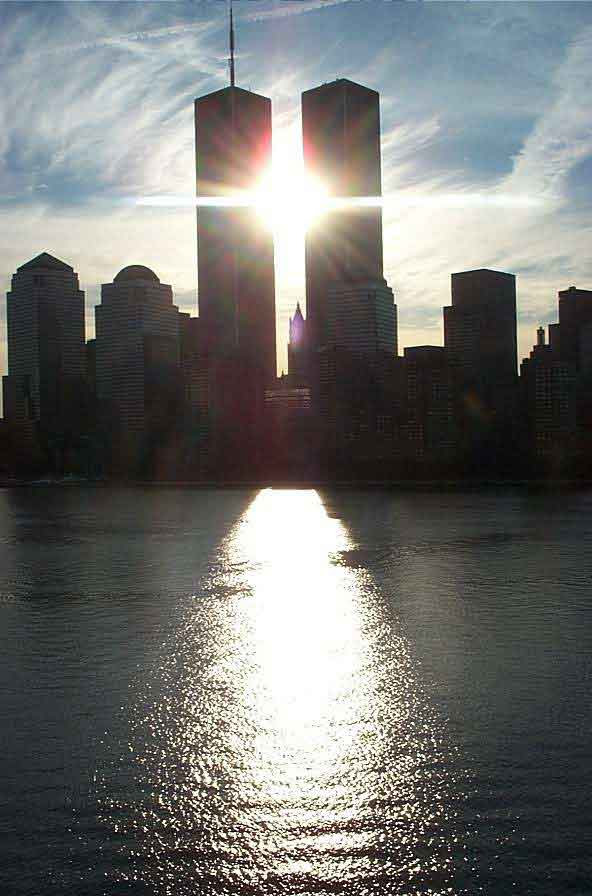 Posted by Michael at 6:33 am No comments:

Often, when you watch competitive sport, you see young competitors winning. The best of them have an unbelievable amount of focus, they have little experience of anything but winning, and often don't seem to realise what a big deal it is. Pete Sampras was like that when he became the youngest person to win the US Open in 1990, and he was like that for most of his wins at Wimbledon. Sometimes, however, you see a great sportsman, who it appears the younger players have caught up with and, who it appears is past his best and the media has declared him 'finished', find something, somewhere inside him that reminds him that he still is a great player, and that he can win one last time. This is really nice when it happens, because competitors who do this know how hard it is and really appreciate the fact that the old man has done it one last time. I remember Jack Nicklaus winning the Masters in 1986. And of course Pete Sampras this week. The trouble is of course that in this case the 'old man' is younger than I am, and I don't feel old. From the point of view of Australian sports fans, another key instance of this is swimmer Kieran Perkins winning the 1500m freestyle at the Atlanta Olympics. I think we has about 22 at the time, so "old man" can mean some odd things in these circumstances.
Posted by Michael at 2:03 pm No comments: