The world is a remarkable place 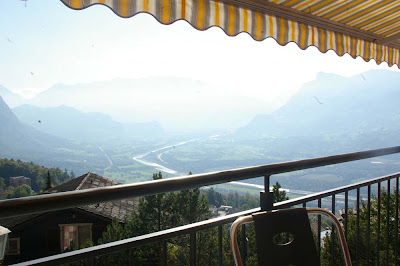 I am sitting at an outdoor table on a hotel balcony in Triesenberg in Liechtenstein, looking down on the Rhine river (not much of a river this far into the Alps, but it has still carved quite a decent valley) and drinking excellent Austrian beer. The haze in the photograph is actual haze. It is not caused by the camera. If there is no haze in the photograph, then that presumably means it is caused by the beer. Tomorrow morning at 9am I shall be back at my desk in an office at Canary Wharf in London. It does amaze me that I can spend weekends like this. Weekends away like this can also be astonishingly inexpensive, too, although Switzerland is a little more expensive than Spain or Portugal. I love being at work on a Monday, and in the middle of the afternoon unexpectedly putting a statement like "I was sitting beside the Rhine yesterday, and a strang thing happened....".

When I am in places away from home, from time to time I see temptation and want to succumb. I see a sign showing bus fares to Calcutta or ferries to St Petersberg and think "I could just buy a ticket and see where I go". Of course, I never actually do this. Today, the temptation was simply seeing a sign on a motorway, telling me that "München, D" was a mere 250km away. I have never been to Munich. I could have given Alan a call, and could have been buying him a beer a couple of hours later.

Of course, the minor problem with that plan is that I have to be at Zurich airport by 9.10pm at the very latest. While I probably could have bought Alan a drink in Munich and made it back to Zurich by 9.10pm, it would not have left much time for anything else other than driving. As it is, I think I will briefly visit Feldkirch in Austria (this is a rare chance to visit four countries in one day, and then drive to St Gallen to have dinner and visit the famous cathedral and then drive back to Zurich.
Posted by Michael at 9:44 am 15 comments: