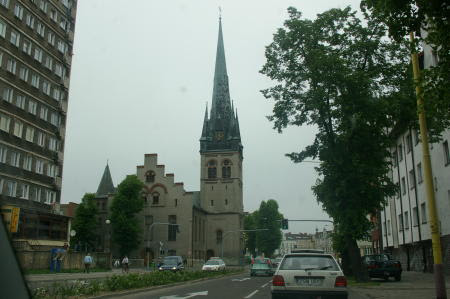 I don't think I can call this a quota photo, as that would imply some sort of quota.
Posted by Michael at 6:17 am No comments:

I have a piece on the murder of Alexander Litvinenko, fast casual restaurants, and the severing of penises over at Samizdata.
Posted by Michael at 6:39 pm 1 comment:

Kolsch is also a fine thing 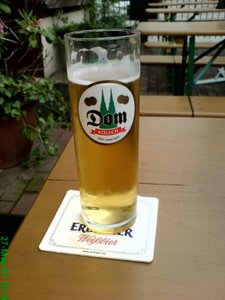 Much easier to find in London.though. (Sometime soon I will figure out how to get an ampersand and hence am umlaut in T9). (Actually it doesn't seen to even know the word ampersand. My regards to itap).
Posted by Michael at 11:24 am 2 comments:

Now in a bar drinking beer - still in Rostock 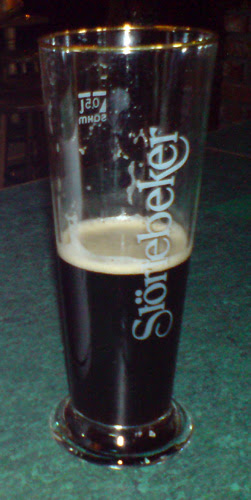 Right now I am having a Störtebeker Schwarzbier. The schwarzbier style is traditional German beer that got kind of imprisoned behind the iron curtain but has had its profile raised a little since the end of that. It is sort of a black lager. Not exactly a stout, but something headed in that direction.

To me, what it tastes like is an "old" beer. For what I mean by this, a little history. When the British first came to Australia, Australians attempted to make traditional cask conditioned ale in Australia. People who enjoy real ale know that this kind of beer is not very stable: it needs to be kept at the correct temperature and properly looked after before being drank. I enjoy a real ale more than the next guy, and I know that the experience of a "bad pint" is unfortunately too common. This style of beer making didn't work in Australia, because the climate was too hot and the beer would go off before being consumed. Thus by the end of the nineteenth century, beer made in Australia had evolved, and a black lager like beer is essentially what it had evolved into.

Around the turn of last century, proper lager making was introduced into Australia (by, amongst other people, the Foster brothers from the US) and this became the bulk of the Australian beer market. Lagers became known as "new" beer, and the traditional dark beers as "old" beer. Old beers were (and are) top fermented, and new beers bottom fermented. (This refers to the position of the yeast when the beer is being brewed. For a top fermented beer the yeast is at the top, and for a bottom fermented beer it is at the bottom.

The most common old beer that is still available is "Toohey's Old", which is still available on tap in most pubs in Sydney and the state of New South Wales. "Toohey's New" is the most popular lager in NSW. Toohey's traditional Sydney rival was Tooth's, which made similar beers, but its beers labels were disparaged after Tooth's was bought by Castlemaine of Victoria, when that brewery turned its Melbourne brands (Foster's and VB) into national brands. Old beers other than Toohey's still exist, but they are minority boutique brands these days.

However, when foreign beer experts come to Australia, the always really like Toohey's old. It is massively overrepresented in guides that talk about "Great beers of the world". Certainly it is the only beer in Australia produced by a mass market brewery that regularly manages it. I rather like it.

And German schwarzbier tastes very similar. The history is completely different, so I suspect this is an accident. (I think both the Germans and Australians would see these as old fashioned working class beers though).

Hmm. Wikipedia tells me that schwarzbier is now bottom fermented but is these days top fermented. If I were one of those people who worries about products being "authentic", perhaps the Australians do better than the Germans.
Posted by Michael at 10:20 am 4 comments:

Now in the central square in Rostock 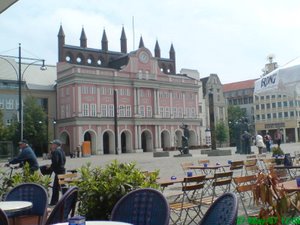 I wonder how much uploading this from my phone will cost. There is a simple way to find out, I guess
Posted by Michael at 7:10 am No comments: