I was looking for a nice contrast of things, and I thought that the bullring in the foreground, an in some ways fairly typical spanish city in the middle, and a long line of cranes indicating that this is indeed one of Europe's most important ports in the background was nice.

Algeciras, like Felixstowe, is one of those ports that is not historically very important but is a very major point now due to its strategic location. The really large ships on the route through the Mediterranean and Suez Canal to Asia are not going to divert to Valencia or Barcelona, so they stop at the very bottom of Spain. Containers can then be transferred to smaller ships to head north or elsewhere, or onto trucks or trains to be taken to other points in Spain. (When container shipping arrived in UK, another reason why much of the shipping moved from London to Felixstowe was that the Port of London was very heavily unionised and Felixtowe wasn't. I am not sure if a similar factor came into play in Spain, given that the alternative of Cadiz is also famous for its labour disputes and militant union men. in any event, Algeciras is now the key port.

With respect to the photo, having taken it I then realised that I also had the Rock of Gibraltar behind the port, and it is always delightful to get more in the photo that you intended.

Of course, "hub" seaports (in which containers are unloaded from one ship to another, or possibly other modes of transport) are like hub airports. Location is important in the sense that they need to be very conveniently on the route from A to B, but local markets are possibly less important than the strategic location and efficiency of a port. The busiest container port in the world is in Singapore, which is a significant but not very large market in a perfect location at the end of the Straits of Malacca. (The two Chinese ports of Hong Kong and Shenzhen - essentially two parts of the same urban area with a border down the middle - are each individually close to Singapore in terms of size, however. Combined they are massively busier).

Algeciras on the Straits of Gibraltar is a perfect place for such a port, but so is Tangier in Morocco. (The Indonesian island of Batam is as good a place as Singapore, too, but building a major port in Indonesia is just too hard). And as it happens, there is an enormous project to build a gigantic port in Africa, directly opposite Algeciras, the so called Tanger-Med, port, actually about 40km east of Tangier. I visited it the day before I visited Algeciras.

Well, when I say visited, I mean "went past it in a bus", actually, so my photographs are perhaps a little lacking because of this. However: 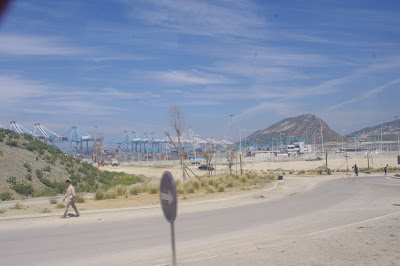 It's actually a lot bigger than that - I was only able to get a certain amount into the photo. In fact, when complete, it will be much bigger than the port at Alegiras on the Spanish side. 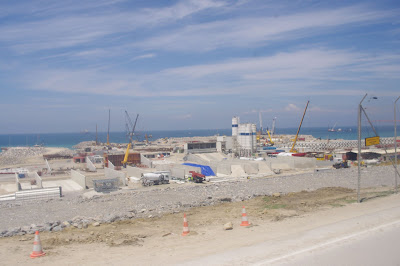 There is a lot more under construction, too. Plus there is an extensive motorway system heading south. When the port is complete, it will be the largest and hopefully busiest in Africa. To some extent it is to compete with Algeciras - in terms of transferring containers from one ship to another, Tanger-Med will be more modern and will have lower cost and (hopefully) more flexible labour. As well as that, the port is about trade between Africa and Spain, Europe, and further afield, and this is all good too. 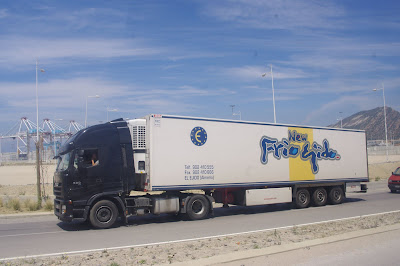 One hopes that this is actually a sensible project, and that it will aid African development and international trade in a significant way. This of course requires efficient management, relatively free markets, the rule or law, and reasonably low levels of corruption. The port is apparently being built with government money, and run by "a private company with public sector privileges". That sounds like an invitation for trouble, but is probably no worse than the arrangements by which many ports are run. One does also wonder from who the Moroccan government has borrowed the money. There is a reservoir of cheap capital that is used to fund Arab infrastructure (and other) projects that is ultimately based on the huge oil wealth of the Emirate of Abu Dhabi. Like all mispriced capital, such money can be useful if you are trying to borrow money to finance and build a sensible business, but the mispricing also tends to encourage bubbles, rentseeking, excess, and an ultimate collapse under a mountain of debt. Given the strategic location of Tanger-Med, a sizeable port is sensible, but one hopes that massive overbuilding has not occurred. The story of EU aid for infrastructure projects in Spain and Portugal was starting off with sensible projects, and ending up with absurdity, and one hopes that this is not similar.
Posted by Michael at 6:47 am 1 comment: