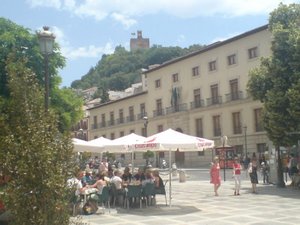 A lack of posting

I have been busy, so this blog has been left fallow for a few days. On the other hand, if you are desperate for something from me, I wrote a small on Samizdata yesterday on mobile phone statistics, and I have been leaving a wide assortment of comments on the Olympics logo etc etc over here.

The funny thing about the Samzdata post is that it was intended as a tiny "Ha, isn't that funny" comment about the fact that Britons dropped 855,000 mobile phones down the toilet in 2006 and I added a bit if filler. I have received no comments whatsoever on what I thought the article is about, and a lot on the filler. That's the way it goes, I guess.
Posted by Michael at 7:05 am 2 comments: 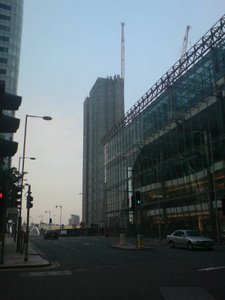 When the September 11 atrocity occurred in 2001, there were a number of new buildings under construction in the Canary Wharf office district in East London. They were all completed, but for about several years after that there were no new buildings under construction. It may have been that September 11 slowed demand for new office space, it may have been that potential tenants were nervous about tall buildings, or it may simply have been that there was a slowdown coming in the financial sector anyway. In any event, for several years there was a significant amount of vacant space, although not to anything remotely approaching a disastrous extent. The vacant space has filled, but gradually. However, over the last year the vacancy rate has become tiny and several large buildings are under construction. Whether this means that the market is about to burst and we are headed back to a situation with empty space I don't know, but for the moment things are quite fun to watch.

As it happens Canary Wharf group has planning potential for the buildings presently under construction and for three or four more to the west and north of the present buildings. After that - perhaps in arount 2012-2015 - further plans to expand the Canary Wharf office development are going to require more planning approval. Some of this is kind of there - Canary Wharf Group and British Waterways have agreed to embark on a mixed use development (some of which is to be offices) on Wood Wharf immediately to the east of Canary Wharf, and although Tower Hamlets council has supposedly approved this, the regulatory environment is unlikely to be quite as benign as what has existed so far. There are also plans to develop various things at the Royal Docks further east, but what can be built here is height restricted due to the nearby London City Airport. Things do become interesting in about 2015-2020 when there is a lack of space for more large office buildings. From a transport perspective, the Jubilee Line Extension may be the newest piece of the London Underground, but it is already very crowded at morning rush hour. Crossrail needs to be built if Canary Wharf is to keep growing at its present rate for that much longer.

The only direction from Canary Wharf I haven't discussed in this post so far, is south towards Greenwich. The area directly to the west of Canary Wharf is perhaps the most interesting. There are all kinds of residential towers, retail space, hotels, and the like going up to provide support services (and literally, lower rent space) that interacts with the rather clinical office developments. This is gradually pushing west. I would favour abandoning all planning controls for the entire Isle of Dogs and letting a great new Pudong arise in London. This might cause a certain amount of conflict when it came in touch with the housing estates to the far west of the Isle of Dogs - some of London's most impoverished - but its a matter of buying the residents and the council out. Most things like this can be resolved with enough money.
Posted by Michael at 2:27 pm 1 comment: