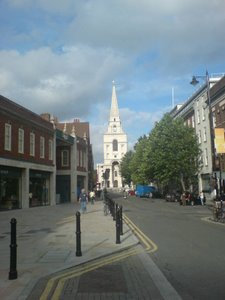 Posted by Michael at 5:00 pm No comments: 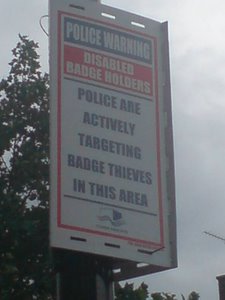 Yes, I am sure the police sit in the station in the morning, and the PCs are told just how many badge thieves they are expected to catch today.
Posted by Michael at 9:46 am No comments: 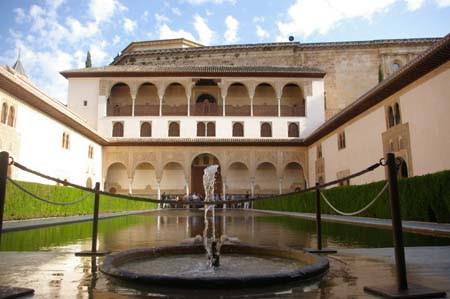 As I have mentioned in pieces, I did enjoy Granada at the weekend. Most of my experience of Spain is of further North. I have been to Barcelona several times, to the Basque country several times, and to Galicia once. (I also went to Madrid once in 1993). Andalucia is relatively new to me, although I did go to Almeria for a weekend in January this year.

Given the loveliness of the place and the fact that Granada is a tourist destination, for one thing I was struck by just how cheap it was. One of the big factors in this is the free food. In Granada you go into a bar and order a drink, and you get free tapas. Generally it isn't just a bowl of olives, either. You order one beer, pay €1.50 to €2 for it, and you get quite a nice little item of food with it. Have three or four beers and you will have also had a good lunch. It took me a while to figure this out. For the first bar I went into, I pointed at the tapas that one of the other customers was having and suggested I would like one of those, and I was immediately asked it I wanted a beer. I said yes, but what I did not understand at the time was that ordering the beer made the food free. A few minutes later I ordered another beer, and a (different) plate of food arrived. I pointed out to the barman that I hadn't ordered it, but he laughed and explained the situation to me.

Still, though, I didn't appreciate yet how ubiquitous this situation was. On Saturday evening, after walking around the Alhambra and other parts of the city, I was tired, and I sat in a restaurant and had a large meal. I then thought I would go bar hopping for a bit, but when I did so, I found I was being given lots and lots more food with my drinks, to the extent that the restaurant meal had almost been rendered unnecessary. In the evening, the bars were big on the toasted cheese and ham sandwiches.

Long term readers of this blog (assuming I have any) will remember that I have encountered this tradition before, but it is not really a northern Spain thing. In the Basque country the bar food (pintxos) is elaborate and delicious, but you do have to pay for it. Similarly, I have never received free tapas in Barcelona. I think I did encounter it in Almeria, but it did not seem as ubiquitous as in Granada. It does make for very cheap meals though - you can have three beers and a substantial amount of food for €5.

The other thing that was different in Granada from what I was used to was the set menus in restaurants. In Spain, you go in and order the menu del dia, and you get a three course meal for about €10. Normally, this includes drinks. Quite often you get three courses, bread, and a whole bottle of wine for that €10. Oddly, though, in Granada the menu generally doesn't include the wine. You have to order drinks separately. On Sunday I had a three course meal for €7, but I had to order my vino tinto separately. I think I was charged about €1.20 for a glass of wine. I ordered and consumed a second glass of wine half way through the meal, but I was only charged for one. So it didn't exactly break the bank.

However, when you order drinks in Granada, free food.
When you order food in other parts of Spain, free drinks.

Neither of these things are reversed.

It is all complicated. I am sure I would figure it out more quickly if I knew the language.

Update: When I listed the parts of Spain I had been to, I forgot the little trip to Valencia I made in January last year. Another nice city, culturally close to Barcelona. I don't recall getting any free toasted cheese and ham sandwiches there.
Posted by Michael at 6:28 pm 1 comment: 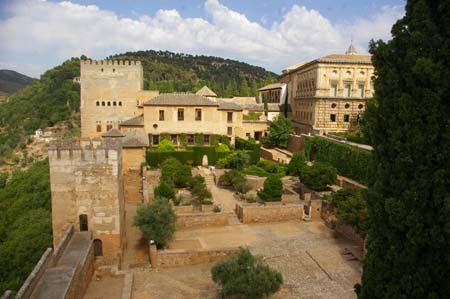 I seem to be managing to write or post something about every second day on this blog. This seems to indicate that I am serious about bringing this blog back, so I think I shall keep it up. If I am going to make it permanent I need either a redesign or I need to thoroughly hack the template. I think the blog looks a bit generic right now.

Moblogging is certainly fun, although it does lead to a lowering in the quality of pictures on the blog a little. It is not the same as taking 100 pictures, looking at them all carefully on a laptop screen, and then posting the best. If you blog from a mobile directly, you pretty much end up posting whatever you were lucky to get.

I think this is an example of a general conflict that occurs when you post photographs. One possibility is to post the best photograps in terms of the quality of the picture itself. The other is to post the most interesting photographs in terms of making some sort of point, or pointing out some irony between foreground and background, or something like that. Although I am a reasonably serious photographer and I care about taking the best possible photographs and succeeding in terms of the first category, the second almost always wins when I decide what to blog. (For instance, I thought that seeing the EU flag flying in the exact spot where once flew the banner of Ferdinand and Isabella was quite delicious, although nobody commented on it). I think this makes the blog slightly less striking on first glance, although hopefully it makes it more interesting if you settle down and read.
Posted by Michael at 5:44 pm 6 comments:

I have been waving red rags at bulls over at Samizdata.

By the way, the Alhambra at Granada is one of the most stunning sites to visit in all of Europe. I will post some more pictures over the next few days.
Posted by Michael at 6:47 pm No comments: