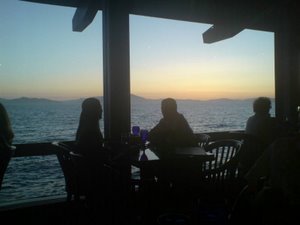 American Airlines have found and delivered my luggage. Well done them.
Posted by Michael at 11:41 pm No comments:

Driving the PT Cruiser around for a day or two is quite fun, although it is not the sort of car I would probably buy myself. I don't presently own a car at the moment, but I am generally into reliable and functional with respect to cars. The Cruiser is just ultimately a little too silly for me, although there doesn't actually seem to be anything wrong with it in terms of functionality, and it is quite a pleasant car to drive. (Where is the clutch though? Surely that should be part of the "retro" quality too. Of course, Americans then wouldn't be able to drive it).

In this instance I just ordered the cheapest class of car (as I usually do), and this is what I received. This sort of thing happens a lot when I rent cars in the US. From ordering the cheapest class of car, I once got a Pontiac Grand Prix (with a 3.5 litre engine) and on my most ludicrous occasion a full size Sports Utility Vehicle. (A Chevrolet TrailBlazer). I had never driven such a car before, and so my first experience of doing so was in Manhattan. At rush hour. I discovered this is one of the few ways of getting those yellow taxis to show you respect. Last time I was in California I got a Subaru Forester, which I thought was a lovely car, and was really nice for the relatively long drive from San Francisco to Crater Lake in Oregon and then down Highway 1 back to San Francisco that I took it on.

In Germany last month I did something I rarely do, and paid more money for a more expensive car. I thought that an "Audi A3 or similar" sounded like it would be fun on the German autobahns, and as it was only £20 more for the weekend, I paid the extra money. What I was actually given was a Skoda Octavia. Although it could be argued that an Octavia is very similar to an Audi A3 as both are based on the Volkswagon A4 platform and are at a certain gut level the same car, I wasn't really impressed. In the event that I had met a supermodel in the nightclubs of Hamburg who felt like coming for a drive to Rostock with me the next day, I don't think she would have been impressed either. Thus I am back to always ordering the cheapest car and perhaps being pleasantly surprised.

I am in the Bay Area now (although I think my luggage is in Los Angeles - it is not with me) and I am returning to the Los Angeles on Monday so I shall sample another rental car then.

Update: Actually come to think of it, the Pontiac might have had a 3.8 litre engine. It wasn't short on power, anyway. It almost made me feel at home. Australians do love cars with ludicrously overpowered engines. They are like the Germans that way. How they are not like the Germans is that speed limits on Australian motorways are no higher than 110km/h and are generally enforced, so what exactly you do with a car like this is something of a mystery.
Posted by Michael at 12:06 pm 2 comments: 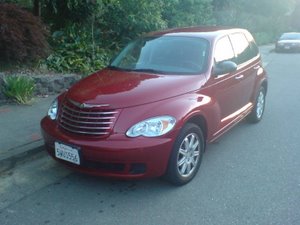 For some reason I always get really ludicrous rental cars when I am in America.
Posted by Michael at 11:28 pm 4 comments: 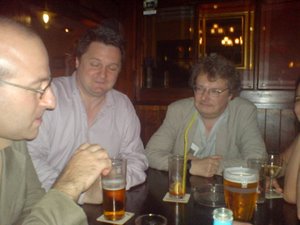 Update: That was in the pub after my talk on China at Christian Michel's last night. I was very happy with how the talk went.
Posted by Michael at 5:44 pm No comments: 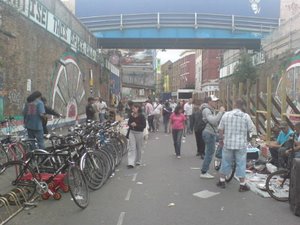