Just out of interest

I upgraded my phone in January, and all the photos posted to this blog this year have been taken with a Sony-Ericsson K850i rather than a K800i. This has a 5 Megapixel rather than a 3.2 Megapixel camera. I think the quality is quite lot better. The new camera handles low light and shots with flash much better than the old one.

Sadly, though, I think the phone may have gone backwards in other ways. Sony-Ericsson fixed the two most annoying things about the K800i: the lens cover that came open in your pocket and the SIM slot under the battery. However, they messed around with the user interface and controls on the main keyboard. This is a shame, given that this was the area in which the K800i was right the first time. This is annoying, and I think it means the K850i is not going to be quite as successful as the K800i (which was a huge hit). Shame

A camera in my phone that is good enough for day to day photography needs for web publishing has been a holy grail of mine for a while. I don't carry a dedicated camera everywhere, but I do take a phone. this desire on my part has led to me upgrading phones a good deal more often than I would have otherwise, which is probably what the phone manufacturers want. I'm still not there, but I might only be a couple of more phones away. 5 Megapixels is plenty - it is all about sensor quality now. (Actually I am aware that it has been all about sensor quality for several phones now, yes). There are one or two phones available now with optical zooms, although I am not sure how important that is. I guess I will see next upgrade.
Posted by Michael at 2:08 pm 2 comments: 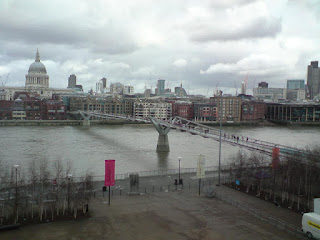