Any major airport (particularly the sort of long haul airport where lots of people change planes) has a bar where people who find themselves stuck in the airport for a few hours (due to a change of plane or a refueling need for the plane they are on or similar) can spend the time drinking beer. When travelling from Europe to Australia I occasionally find myself in one of these bars. This one is the one on the roof of Singapore Changi international airport, which I visisted on the way through to Australia last week. This one is quite intriguing, because it is on the roof, and there is a small area costisting of a bar and cactus garden. (The two photos that follow were taken from approximately the same spot, but looking in opposite directions)

If you go for a drink in such a bar (as I tend to when in such airports) the sorts of people you meet tend to be thirty and forty something types who look like they have suffered from a bit of wear and tear. (This is of course at least partly jetlag. They no doubt look less so when they are relaxed and at home, wherever on planet earth that may be). They tend to be Anglophone, British and former dominions of the British empire types: English, Australians, New Zealanders, the odd South African, the very odd Canadian. (Not Americans, however). They tend to be the sorts of people who are doing okay but are not extremely prosperous, and who work at the type of profession for which the work is spread around the world and usually employs independent contractors rather than employees. (Now that I think about it, there is a lovely portrait of the type of person I am talking about in Neal Stephenson's 1996 Wired Essay Mother Earth Mother Board from 1996. He is talking about people laying undersea fibre optic cable, but the image is more general than that. In any event, such people seem to form an ethnic group of their own. The national origins become irrelevant (other than that general British Empire sort of type) and they all become relatively similar in the bar.

And the bars are very similar, whether you are in Tokyo, Singapore, Bangkok, or Manila, although in superficial terms they might have strange unique features such as cactus gardens. (They do vary a bit when you get outside Asia. The subculture I mentioned will still exist, but perhaps only in one corner of the bar). You find yourself stranded airside in such an airport, and you know that a familiar bar will be there somewhere, and you eventually do find it at the end of a dingy corridor, where you walk inside and you find the same expats as always. It will not be necessary to change your money first: the bar will take your sterling or Australian dollars, although they will frown on South African rand. You will sit down, and start a friendly chat with people next to you.

These days, some airport terminals have a different kind of lure, which is a free internet cafe. If I have to waste two or three hours in a terminal, this can sometimes be a better way to make the time pass than can an expat bar. However, it depends on the circumstances. There is a particularly good free internet terminal in Tokyo Narita airport, even if the security requirements are irritating. There is one at Changi, but when I was there it only had four terminals, and two were out of order. This meant endless queueing for a short period on the internet, which made it possible to check e-mail, but no good for making time pass. To while the time when I was waiting, I did take a photo, but the lighting was weird, and my digital camera does not handle weird lighting very well.

While the bar would certainly have taken Australian dollars or sterling, as it happened I had spent all my sterling in the bar at Heathrow, and I didn't want to spend my Australian dollars because I still wanted to have some when I arrived in Melbourne, so I got 20 Singapore dollars (about A$20 or £8) out of a cash machine. I didn't spend all of them, because I thought it would be good to still have some when changing planes in Singapore on the way back, which I was intending to do.

As it happened, though, I have delayed my departure from Australia by four days and the only flight I could get back was via Tokyo. (I have a four hour layover in Tokyo in fact). It is quite possible (indeed likely) that the bar in Tokyo will take Singapore dollars, but it is not quite as certain. So I may have to keep the Singapore dollars in my wallet until next time I find myself in Singapore. But that will no doubt not be before too long.

And by coming back via Tokyo instead of the Sydney-Singapore-Frankfurt-London routing I was taking originally, I have lost the two days in Germany I was intending to reward myself with on the way back. Oh well. It is at least possible to buy draught Erdinger in London.

Posted by Michael at 6:24 pm No comments:

For those who are wondering

What I am presently doing in Australia is assisting my parents, who are moving house. My father has lived in the same house for more than 50 years, and my mother has lived there for nearly 40. It is a deeply strange and in some ways disturbing experience, because a lot of it involves sorting through childhood possessions, school books, university notes, and all sorts of relics of the first 20 years of my life, and figuring out just what to keep. Many of these things are things I would never look at again, but they have very distinct memories attached to them. It's very difficult, and at times quite painful.
Posted by Michael at 4:49 pm No comments:

I have just stuck an Australian SIM card in my mobile phone. If anyone wants to reach me during the next couple of weeks, I can be called or SMSed on +61 404640711
Posted by Michael at 2:38 am No comments:

I have a piece on the last stages of the UEFA Cup and the Champions League over at ubersportingpundit.
Posted by Michael at 5:29 pm No comments:

I have tried the more famous green and red label Coopers before, but this is the first time I had tried the yellow.

I do enjoy a stout, and this one is indeed very good.

Posted by Michael at 2:23 am No comments:

I have a piece on Tim Blair's terrible secret over at Samizdata.
Posted by Michael at 1:29 am No comments:

I have a piece in which I basically just quote Bruce Schneier at length as to why ID cards will not make us safer over at The White Rose.
Posted by Michael at 4:44 pm No comments:

Take me to your lizard

One thing that is notable is how much more wildlife there is in Australia compared to England. Just in two day's in my Mum's backyard we had this

Hopefully we can get some snakes soon.
Posted by Michael at 11:41 pm No comments:

I have a piece that ended up being about Brian Lara's triple century against England over at ubersportingpundit.
Posted by Michael at 8:27 pm No comments:

Stuff I didn't get around to posting before I left England

Southall is an Indian dominated district in West London. (If you have seen the film Bend it Like Beckham, much of the movie is set there). I am more familiar with the Indian dominated districts in South London, for instance the area around Tooting. However, while that are contains a lot of muslims as well as hindus, Southall contains fewer muslims and a lot of sikhs. Like Tooting, Southall is full of extraordinarily useful shops. For instance, there are none of those problems you sometimes run into when you need pooja accessories. 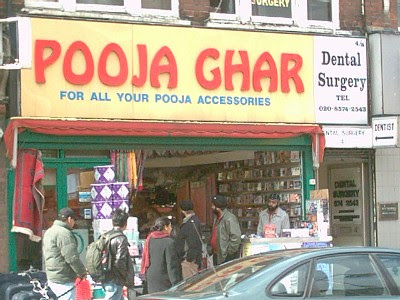 And although there are fewer muslims than in some areas, they are certainly not entirely absent. 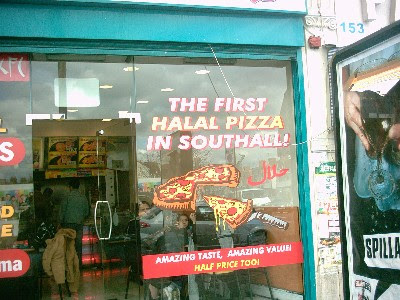 And I don't know quite what to make of this extraordinary vehicle. It is parked outside a Tandoori house. In fact, the proprieter of the restaurant claims to have invented the word "tandoori" in the 1960s, and that is entirely possible. I believe it is possible to hire the vehicle for use as a party room or similar. 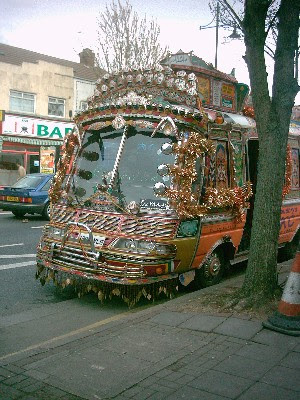 And the vehicle is a subcontinental model of bus, and does not satisfy British road standards and apparently cannot be registered in Britain. However, it is on the road, and it has Pakistani number plates. Presumably it was driven all the way from Pakistan. 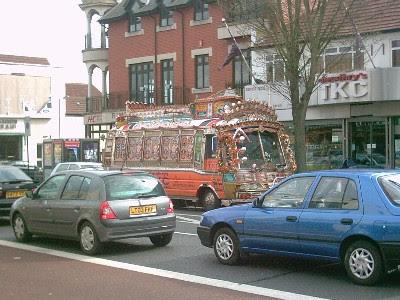 Posted by Michael at 8:00 pm No comments:

Non-Australians may be unaware that the city of Melbourne is an extremely Greek place. Australia received a large number of immigrants from Greece in the second half of the 20th century and for some reason most of them settled in Melbourne. (A factoid you hear in Australia is that Melbourne contains the second largest number of Greek people of any city in the world, after Athens. This may or may not actually be true).

In any event, the Greeks of Melbourne are on the whole good people, and one finds famous Australian footballers with names like Demetriou, and Greek restaurants that in the middle of Melbourne that are still open at four in the morning, something that was quite useful when I was there over the weekend. But of course despite being as Australian as can be, the Greeks are still Greek. 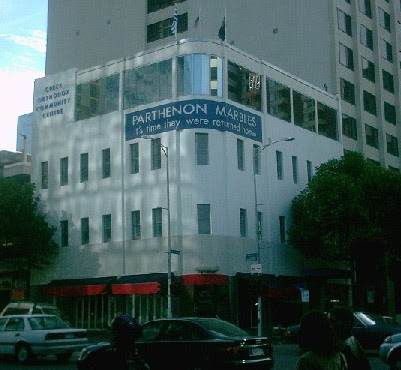 Clearly, there is a lot of anger amongst the Greeks of Melbourne. They want the Elgin Marbles back in Greece and they are not ashamed to say so (although for calling them the Elgin Marbles I will no doubt never be served breakfast in any of their restaurants again - which is a shame because the breakfast I had on Saturday was excellent). Tony Blair must surely be influenced by this. The power of Greek Orthodox Community Centres in Melbourne must surely be deferred to.
Posted by Michael at 10:34 am No comments: