Am I am old fogey?

At this precise moment, I am sitting in a bar/cafe outside an indy music club in London's East end. This is largely populated by people a good deal younger than myself - thy are what I would echo boomers, although I sometimes wonder if anyone else does. Actually, the general media tends to use horribly derivative terms to describe this ground - vile expressions like "Gernation Y" or "Generation Next". I prefer "echo boomers" myself, as it gets to the gist of what we are seeing - the post war baby boomers themselves got to having children themselves in a big way in the late 1970s and early 1980s, and there was another demographic bulge that was just hitting adulthood around the turn of the millennia. They have just got to the point where they are probably the group doing creative things in the most interesting ways. As well as being a demographic bulge, they are the first generation to have really been exposed in a mass sense to computers and networks throughout their teens. I was born in 1968 - I come from the last generation not to be exposed to computers and networks prior to adulthood in this way. It is not so much that I missed these things myself - personally I did not. I encountered computers in my early teens and the internet in my late teens - but at that point this was unusual. In my generation it was the nerds who did this kind of thing. The first web bubble in the mid to late 1990s was led by the nerds of my generation driving the technology into the mainstream. In 1999 being someone who had used the internet for more than a decade was something you could use to portray yourself as being ahead of the curve.

Now things are different. The younger generation - seemingly all of them - are comfortable with technology in a way that my generation was not. It is just part of the background. They are the ones driving the current tech boom (if you like). My having used the internet for as long as I have no longer impresses, because surely the network has always been there. Discussing the time when this stuff was just coming into being is the sort of thing that might elicit questions as to whether I knew Charles Babbage personally. Well, almost.

However, the flipside of this is that in a way this is a more comforatable environment for a nerd like me. Getting out a laptop at a table in a place like this does not get any "What a nerd" winces that it might in a place where my own generation is more prevalent. There are other laptops around. WiFi is expected. (It isn't always there, though. The search for wireless is something that this generation often pursues, I think).

(I might comment that Apple is clearly doing *really* *really* *really* well amongst this generation. I am using a subcompact Sony Vaio which gets looks for its size and elegance, but not for being a Sony. Yesterday's brand, I fear).

In fact, though, I am in a way still ahead of the curve. I have grown tired of seeking out WiFi hotspots, so I have recently got myself a 3G (HSDPA) wireless card for my laptop. I now get my internet access from 3G mobile phone networks, and no longer need hotspots, at least not when I am in the UK. The existence of technology like this has not become widely known yet. Or perhaps the fact that such technology can be had relatively inexpensively has not made itself known yet. Anyway, I have got to the amusing situation where I am getting looks and questions from other people with laptops in cafes and bars asking why the hell I have internet access when they haven't. It is quite amusing. Perhaps I am not an old fogey after all, but just an old wizened nerd. I need to work on becoming something of a guru figure, I think. 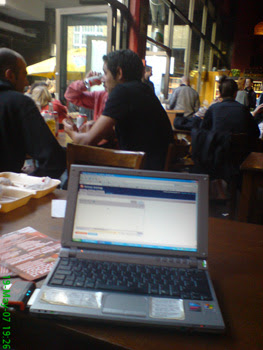 In any event, I think the utility of 3G (and possibly WiMax as well) is going to demonstrate pretty quickly what a hacked together and limited transitional technology was WiFi. The truth is that the US (and other countries) created the 2.4GHz unlicensed frequency band with serious restrictions on the power of devices, and WiFi was a response to the question of "What can we do with it?". Ultimately the limitations of the 2.4GHz band were such that what could be done with it was not very good compared to what could be done with other technologies and frequencies (although the "b", "g" and "n" revisions have steadily improved it) and we are about to see this in a big way. (Local governments, local business bureaus and large companies have just about got to the point where they are building wide area WiFi networks - of course this is an indication that the technology is obsolete).

If you look carefully at the lump sticking out of the PC card slot on the left of my laptop, you will see it has a Cingular logo on it. Why I am using a card that was sold by Cingular, a company that does not do business in Europe? Well, I am playing the glorious game of mobile phone subsidy arbitrage. Mobile phone companies provide hardware and services at prices to customers that bear no relationship whatsoever with the costs of providing the services to their customers. This often means bundles of services that sometimes include hardware (bundled with services) at a small fraction of the cost of the hardware from its manufacturer. These bundles also sometimes include services sold very cheaply if you buy appropriate hardware, or if you buy other services. We now have ultraefficient global markets for all kinds of unbundled goods and services via eBay, Amazon, peer to peer networks and other places, and such attempts to charge prices so divergent from costs are vulnerable to these markets. The trick is to buy a bundle of goods and services from a telephone company, onsell the bits that you don't want and keep the bits that you do, while perhaps buying pieces of other people's bundles the same way. As it happens I purchased my 3G card from someone in the US on eBay who had clearly bought it bundled with a data plan but who had not needed the card as he already had one or something similar. The 3G internet contract was part of a bundle from a British mobile phone company that came almost as a free extra when I bought something else. Put them together and I have not free but cheap internet access on my mobile wherever I go.

And this is perhaps why I am ahead of the curve. Getting 3G internet at a good price involves complex games of arbitrage, and I am very good at this kind of thing. That, though, is the problem with phone companies. They are so inept that they don't realise the best way to operate is to simply provide services at costs plus a margin. They will, eventually, thanks largely to arbitrageurs like me forcing them to. (I don't know why they haven't figured this out , given that the exact same thing happened to them once already when the settlements system for chargin international phone calls collapsed in the late 1990s). And I think that in a year or two 3G cards in laptops (probably internal ones rather than lumps in PC Card or Express Card slots) will then be ubiquitous. And then I shall have to find some other way to impress people.

Or perhaps I shouldn't bother trying.
Posted by Michael at 2:23 pm 3 comments:

I have a piece discussing the Intenational Cricket Council, Australia's decision not to tour Zimbabwe, and Pakistan cricket and Bob Woolmer's death over at Samizdata.
Posted by Michael at 6:10 am No comments: