As I have mentioned, my end of year photo posts obey a fairly strict set of rules as to what is included. In addition, they have no explanatory text other than the locality, country, and month.

However, I like to squeeze occasional oblique connections between photos in if I can. For instance, this set contains two pictures of music halls designed by celebrity architects. Also, the two consecutive cathedrals with twin spires are not adjacent accidentally. (People in England sometimes see Poland as a little grim. I don't find it that way myself, and a beautiful Polish cathedral next to a beautiful Parisian cathedral is a nice comparison). 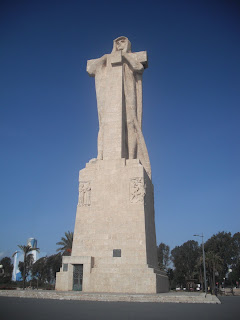 Unfortunately, these were taken in different years, and so cannot be placed in the same essay. This is a shame. The first photograph is of the Columbus memorial in Huelva, Spain, at the point where the Rio Tinto meet the Rio Odiel. Columbus' voyage began (on August 3, 1492) from a point close nearby, perhaps a mile away across the Rio Tinto in Palos de la Frontera. The monument is absolutely enormous. I have never seen a larger statue celebrating a secular figure anywhere (look at the door on the bottom left), although of course it is presented in a religious style to presumably suggest there was something holy about his mission. The message intended by the size, though, is approximately "Here we commemorate the greatest man in history".

The second photograph is of the Columbus memorial in Baiona in Galicia, where Columbus' ship the Pinta arrived on March 1, 1493, providing the first news to Spain that Columbus had found the New World, although at that point it was still believed to be the Indies. Columbus himself was not on the ship: he was on the Niña, which arrived in Lisbon on March 4. (Both ships then proceeded back to Palos).

I didn't travel precisely to see these monuments, but as it happened I was relatively nearby each of them, and upon learning that I was, I was interested enough to then go and see them. Whereas it took the Pinta seven months to get from Huelva to Baiona, it only took me three months. And interestingly enough, I travelled far, far more miles in between.

These two photograps would have been perfect to stick in an end of year posting without explanation and see if anyone got the connection. There is, I think, just the right amount of not quite obvious about it. As it happens, there are replicas of the Pinta in both places, and another theoretical option would be photographs of the two ships. But this would be too obvious.

In any event, the arbitrary end of the year got in the way so it is all theoretical.
Posted by Michael at 6:43 pm 2 comments: