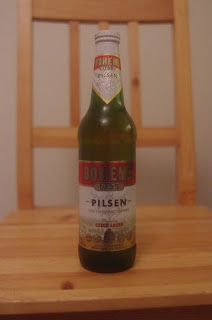 While discussing Czech beer in the last post, I mentioned that Budvar beer is widely available in Slovakia, but did not touch upon probably the most interesting trademark dispute I know of, which is over the use of the world "Budweiser" to describe beer.

There are of course two Czech cities that have given their names to extremely well known beers. One is the city of Plzeň (Pilsen in German), which has given its name to Pilsener. This is a fairly straightforward instance of a place name that has become a generic name. The word pilsener today does not mean "Beer from Pilsen", but is simply used as the name for a particular style of beer. The EU in recent years has tried hard (often excessively, in my opinion) to reclaim European place names on the way to becoming generics names using laws about Protected Designation of Origin, but "pilsener" is too far gone for this. The word does not imply any particular beer, or any particular origin for the beer. Ask for a Pilsener in the Czech Republic or Slovakia and you will get a beer from Plzeň, but this will not likely happen anywhere else. Breweries in Plzeň do not have exclusive use of the word, but nobody is going to stop them using it, either.

The other city known for its beer is Budějovice (Budweis in German). The story here is more complex. A Brewery named Bürgerliches Brauhaus Budweis was founded by ethnic Germans in 1795, and was describing its beer as Budweiser ("Beer from Budweis", in German) since at least as early as 1805. This beer was later exported to the United States and was clearly being copied when Anheuser-Busch started brewing their "Budweiser" in the US in 1876.

A second brewery, now named Budvar, was founded in Budějovice in 1895. This company also called its beer "Budweiser" when it exported it, probably due to the face that this word was already famous. In Czech, it would have been described as "Budějovický", and this name was used domestically.

However, in 1945, the Czech lands came under communist rule, ethnic Germans were expelled, both breweries were nationalised, and German names were seen as undesirable. Bürgerliches Brauhaus Budweis, the more German of the two breweries, was renamed "První budějovický pivovar Samson", and stopped using the "Budweiser" name. I think that Budvar continued using it, particularly for exports to Germany, but I am not 100% certain of this.

In any event, after the Cold War ended, Budvar started exporting again in a big way, and this coincided with Anheuser-Busch expanding too. The two breweries have been fighting each other over the trademark ever since. Beer lovers often express sympathy for Budvar in this dispute, on the basis that the trademark surely means "Beer from Budweis", and also Budvar makes better beer. I am personally not so sure about this, as Anheuser-Busch actually does have a prior claim to the name than that of Budvar, and their size is probably more responsible for the fame of the name than anything else. In addition, although Budweiser does mean "Beer from Budweis", Budweis is no longer the name of the town, which is Budějovice. The truth, though, is that we have a very unusual case in which two companies have very long standing, legitimate claims to the same trademark.

Courts in Europe have tended to favour Budvar's claim to the trademark, and courts in the US have tended to favour Anheuser-Busch. This is probably fair, given the 1911 agreement. In Britain, the courts have ruled that both companies may use the name, and that consumers are smart enough to tell the difference, which is a refreshingly grown-up verdict. In countries where Budvar does not have the rights to the name, they tend to call it Budějovický Budvar, which means the same thing in Czech. (In North America it is sold as "Czechvar", as even this is apparently too much for Anheuser-Busch), In countries where Anheuser-Busch does not have the rights to the name, they brand their Budweiser simply as "Bud".

But what about the Czech brewery that does have a prior claim to the name to that of Anheuser-Busch, the brewery originally known as Bürgerliches Brauhaus Budweis, which changed its name again after communism to "Budějovický měšťanský pivovar ", an exact translation of its original German name? Well, after communism, this company also sought to re-establish its traditional trademarks, and also started using "Budweiser" in the names of many of its beers. However, it only did this in markets where it had an unambiguous right to do so, and has largely stayed clear of mighty trademark disputes with Anheuser-Busch. The brewery still exports, though, under all kinds of names. ("Samson", "Crystal". "Boheme"). So funnily enough, the brewer which probably does have the strongest historical claim to the name is the least inclined to actually use it.

As is happens, my local Tesco stocks their beer, in this instance branded as "Boheme 1795". The fine print on the back of the bottle does mention that the beer was brewed in Budějovice, but the bottle also has "Pilsen" in much larger letters on the front. The beer may be approximately a pilsener in style, but I can't imagine this thrills the people in Budějovice that much. "Pilsen" is a word that anyone is free to use, however.

And yeah, it is good beer. Quite similar to Budvar, actually.
Posted by Michael at 3:18 pm

> consumers are smart enough to tell the difference

... which is that the American beer is p*ss whereas the Czech beer is excellent. I take it you have a reason for not mentioning this

Well, I do mention it (third sentence of the seventh paragraph) although quite deliberately not strongly. I don't emphasise it because it is not relevant to the trademark dispute, which is what I was talking about. "The trademark should be Budvar's because their beer is of higher quality" is not a convincing legal argument, but you do hear people imply things like this when you bring the subject up.

As I said, the trademark dispute really is quite a remarkable one. Two parties claim the trademark, both have been using the trademark widely for well over a century. The party that has the geographical claim to it has actually been using it for the shorter period. The company that invented it still exists, still makes and exports the product in large volumes, but tends not to use it.